YAZZ Band, my recently released compact disc has received significant attention. YAZZ Band was showcased in Down Beat and the CD has been featured on the Public Radio International show “Jazz After Hours.” YAZZ Band has appeared for fourteen weeks on national radio play lists including the North American College and Community Top 30 and Roots Music Report Top 50 Jazz Album charts and the Jazzweek top 50. YAZZ Bandwas listed as one of the “CDs of the Year – Big Bands” by Bebop Spoken Herein the United Kingdom and the CD has received a number of enthusiastic reviews internationally. Jack Bowers of All About Jazzwrites: “Yasinitsky is known as a superb composer and arranger, a talent that is indispensable here, as all the YAZZ Band's songs and charts are his.” Chris Spector of Midwest Recordwrites: “Hard charging, high octane stuff that never lets you down, or even comes up for air, this is a must for big band fans and a smoking lure to bring newbies into the tent. Killer stuff.” George W. Harris of Jazz Weeklywrites: “The material is fresh...with excellent work of the various horn sections with just enough room for succinct solos.” Joseph Lang of Jersey Jazz writes: “Yasinitsky has created a nine-track collection that swings, excites, and illustrates contemporary big band sounds.” Lance Liddle ofBebop Spoken Herewrites: “On the ballad Missing You his [Yasinitsky’s] melodic side comes to the fore although not without a midway blast! The closing cadenza and the final few bars by the sax section are truly beautiful.” Marc Phillips of the Vinyl Anachronistwrites that Yasinitsky “does have a classic style that melds a nostalgic feel from the post-war era with a big, dynamic sound that's suited for modern big band audiences. Yasinitsky leads the band much of the way while he's blowing his sax, and he has a sultry delivery that reinforces that old-fashioned yet sexy mood.”  Paul Wilson of Audiophile Newswrites that “Greg Yasinitsky…is one of the more accomplished jazz musicians I have ever come across… If you like big band and horn driven jazz mixed up together, check out the YAZZ Band.” 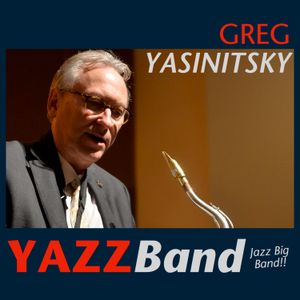