My Jazz Concerto (wind ensemble version) will be performed at LSU on April 23 by piano soloist Willis Delony and the LSU Wind Ensemble directed by Damon Talley.

I will be a guest saxophonist and composer for the BC Interior Jazz Festival in Kelowna, Canada, April 11-13, 2019. On April 11, I will perform on the Boss Tenors concert at the Forum with saxophonist Craig Thompson. We will be recreating live the Boss Tenors album by Gene Ammons and Sonny Stitt. On April 12, I will perform on the Jazz Masters Concert. Also, I will serve as an adjudicator and clinician for the festival. 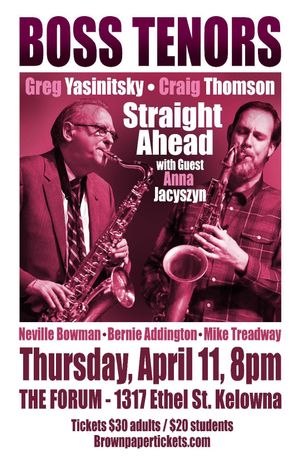 I will be a guest saxophonist, composer and arranger for the University of Alaska Anchorage Jazz Festival, March 21-23, 2019. WSU Alum John Sterling is running the festival.

Four new orchestrations for tenor saxophone and string quartet—String Theory, Missing You, Sideways and Suddenly You—will be premiered by my new ensemble: Moving Parts on Thursday, February 28, at 8pm, in Bryan Hall Theatre, as part of the WSU Festival of Contemporary Art Music. Performing with me will be Meredith Arksey and Diane Cook, violins; Giselle Hillyer, viola; and Ruth Boden, 'cello. Moving Parts has recorded these new pieces and they will be released as an EP soon. Also, the pieces will be published by Walrus Music, a division of ejazzlines.com.